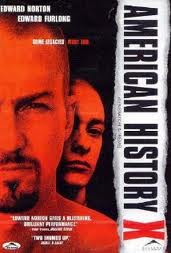 As part of a educational masters unit on Conflict Resolution I was asked to consider the evidence for the impacts of nature and nurture within the film American History X:

American History X relies on the convenient premise that nature has produced a set of academically able children within the Vinyard family; Derek the straight “A” student, Davina the liberal book worm and the untapped potential of Daniel.  From such a starting point the films sees Daniel forced to review the origins of his own extreme right wing attitudes through the completion of an essay analyzing and interpreting the events relating to his brother’s incarceration (for killing two black criminals trying to steal his car).  This provides the film maker with the context to explore causes for Derek’s metamorphosis from enthusiastic student to influential Nazi gang leader and the eventual breaking down of those ideals through the tough realities of the U.S. judicial system.

Daniel acknowledges the issues of being white working class in a challenging economic climate seemingly invaded by different ethnic groups.  Yet this is not an example of nurture, but just the acknowledgement of the environment.  For, to nurture requires a third-persons pro-active influence.  This was initially his father but he died.  Derek’s related grief is again only part of the environment.  This environment certainly amplifies Derek’s continued shift but it did not cause it.  Furthermore the missing father did not create a negative nurture void, causing the retraction of ideals.  With his father gone he was simply no longer nurtured by him.  However, this environment did make him more accepting of a new mentor who had some shared opinions to that of his father.  This was Cameron, the elder Nazi gang Svengali, and a man who did help nurture Derek’s ideas and opportunities.

School appears as another environment within the film; on its own it has no influence.  The film shows that a range of individuals exist within its confines and they are clearly not all following a similar direction.  It is clear that the film is not trying to push some of the more current ideals (See Seth Godin)relating school to the requirements of the industrial revolution to produce basically educated people who understand how to follow instructions.  Yet in school it is made clear that teachers are in a position to potentially nurture.  Dr. Sweeney is shown to be the original inspiration of the young Derek; unlike all other teachers he had the potential to nurture this individual in a positive direction.  Alas the nurturing of ideals is a battle and Dr. Sweeney initially lost.  Simultaneously the film shows how they many teachers choose not to always take on the responsibility for or make the connection to allow the nurturing of students.

The seeds of hate in this film were planted much earlier than school – displayed in the film as a warning not to take an inspiring black teacher and his related black literature as anything more than a subtle form of oppression from a father.  The seed of hatred that then got planted grew only because that negativity and the related anger were never confronted. What would have happened if at that dinner table his father had applauded his son’s enthusiasm and encouraged the exploration of something new without applying additional baggage?  Yet also how could those influential and nurturing teachers know about the baggage from home they need to take on every child with an unreserved optimism.

This entry was posted by neilcommons on November 27, 2012 at 11:10 pm, and is filed under Conflict Resolution. Follow any responses to this post through RSS 2.0. You can leave a response or trackback from your own site.